Painters and skinners. Somewhere to show off skins and look for artistic inspiration.
Post Reply
201 posts

:FI:Snaphoo wrote:... Do I leave off the markings all together, just on the bottom wing or just leave it like it is and we will just have 3 markings on the wings instead of just 2?

That's one of the reasons I made the three stripes under the wings for the IreGreen design. It kinna works with every ac. 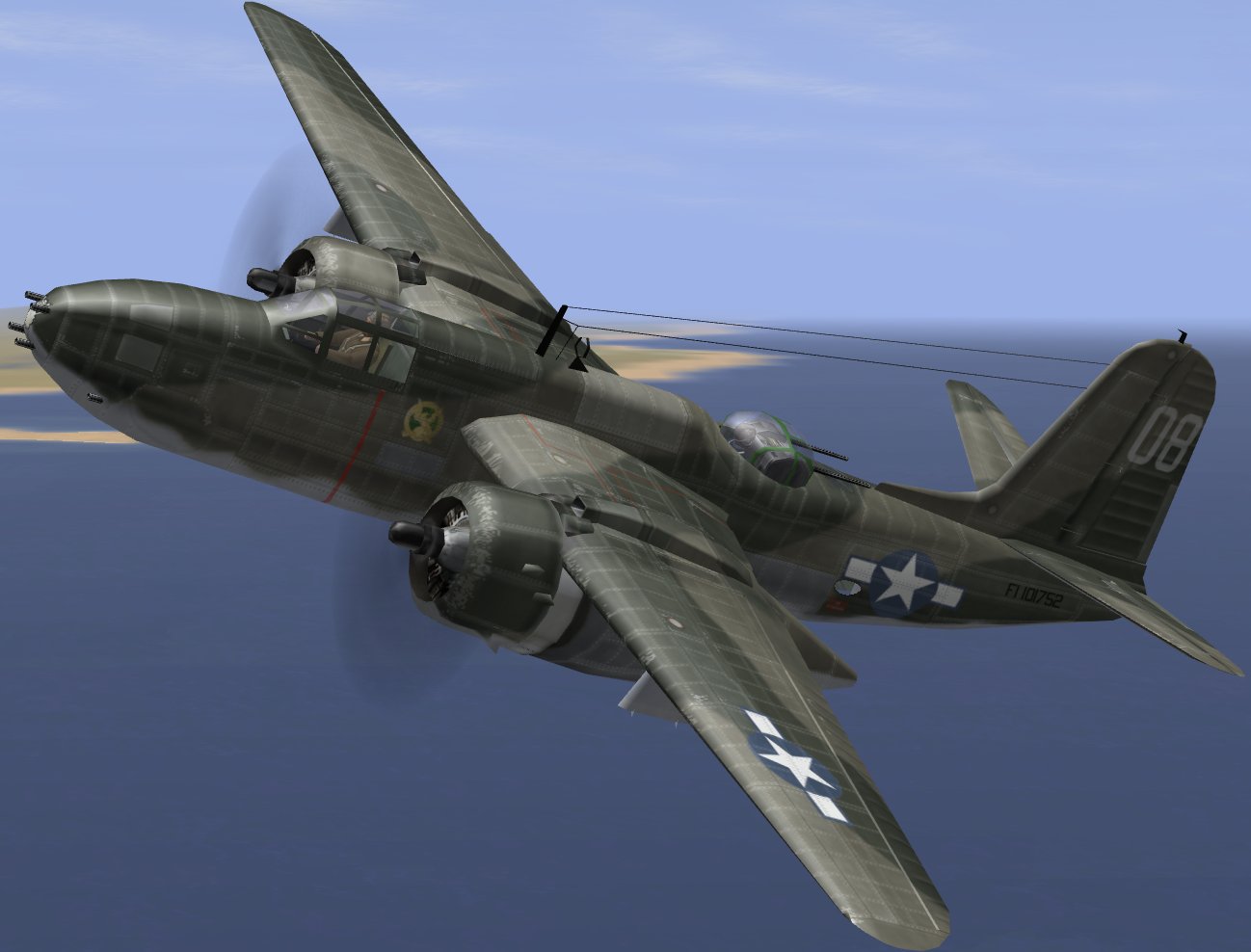 The Havoc w/RAF camo pattern and USAAF camo colors and markings. I'm thinking about a A-20 US squadron green band on tail. Serial no. will be member's forum joining date.

I know I'm doing all US ac so far, but the Stuka, 111 and Italian ac were all done well by other skinners in the IreGreen scheme and can be converted from those templates.

I've got a P-39 on the way, obviously you can too, but I'll try and post a pic by tonight, finishing it up at work right now.
Top

I'll prolly start a Beau, Mossi or one of the Spits next. I think Snaphoo mentioned he was doing a mk VIII?

39 on the way. The green accents are still a bit vibrant, I will step them down some, and maybe play with the green white gold spinner. Still not sure about the red stroke on the star and bar, but it looks sweet. Looks like it switched in August '43, not sure when our missions are.

Damn, that's an excellent template too; lots of great detail!

Yeah, difficult to know which insignia to use. I'm going w/the blue and white one 'til I find out when the missions are.

I like the bottom Stuka best. Gah! I hate when the toughest paint job is the one you want!

:FI:Snaphoo wrote:... Do I leave off the markings all together, just on the bottom wing or just leave it like it is and we will just have 3 markings on the wings instead of just 2?

That's one of the reasons I made the three stripes under the wings for the IreGreen design. It kinna works with every ac.

Well, I may just do the 3 stripe thing. Or a single stripe thing, similar to Noter's fine 39. Or just leave it off entirely. Not exactly "Historically accurate" but then the skin isn't exactly conducive to historical accuracy. I'll post up some pictures for "the decider" and others to look at later tonight.

I have been keeping an eye on this thread guys. Of course sometimes I wonder if you skinners prefer to paint these planes more than fly them.

Reminds me of a neighbour who seems to wash his vehicle much more than he actually drives the thing.

Anyway, based on the polls (so far) it would appear that the majority would like to play this campaign (Italy) next but we have a split for flying as Allied pilots or both. Personally I would like to create 2 permanent teams from amongst the regular H.E. crowd for the next campaign. I believe it will add further tension/excitement to the missions, and hopefully promote even better teamwork among the smaller groups. But letââ‚¬â„¢s see where the final voting takes us.

In the meantime my best guess is that our current desert campaign will probably take us well into June. We could beat the Allies earlier if we start pounding their supplies/bases. Even so I think you boys have some time to get the skins all done.

Below would be my guess of what planes would need to be customized. To be honest I would love to see ALL of them done, but I have restricted my initial selection to a core group for the Allied side. May I suggest that you guys first concentrate on the Allied side then the Axis just in case Mareth ends sooner than we think. I will later post my initial selection for the Axis side.

Spitfire LF Mk. IXc, Supermarine
My apologizes, I haven't looked at these 3 Spit variants. I remember you saying Falcon that the IXc is troublesome to skin. Notwithstanding, I am assuming the IXc has the best characteristics, no? It would be my first choice if that is the case. Leave this one for now until we can confirm which one we will use.

A-20 G "Havok", Douglas
As suggested by Sneaky we might go with the C variant. Need to examine. Skin will work for either type, right guys?

Ideally I would like to provide more choice in this campaign. As host it will give me the opportunity to focus certain sessions on particular planes/situations, etc. Therefore, if you guys do more than those planes highlighted that would be cool too.

I'd say add the 51 and 40, those skins are being worked on too, then we only need the Spit and the allies are done.

Much of the Axis is ready from the Mareth campaign, maybe a new color scheme, but use the same markings.

Would you settle for this ?

I will later post my initial selection for the Axis side.

Will we recycle some of the Axis skins or are they in a completely different region, therefore a different paintscheme is needed?

Snaphoo.
You've got red on you.

Well I haven't received this next campaign. What I do know is that it uses that beautiful valley map (Online Map 4). It has no desert area. Rolling, green topography. I would rather leave most of the decision-making in your hands. I personally have no problem recycling appropriate skins.

Is that a variety of IreGreen or an Italian color?

Check with Tac, I think he wants the designs to be historic colors with just details Irishy. So, he may want an authentic RLM 80 green, verde mimetico (or whatever) with historic-ey lettering and only squadron markings, squadron insignia and artwork to say ":FI:".

Does that make sense? Tac, tell me if I'm wrong. AC should look historic from a distance?

:FI:TacticalS! wrote: ... A-20 G "Havok", Douglas
As suggested by Sneaky we might go with the C variant. Need to examine. Skin will work for either type, right guys? ...

Well, if you don't look too closely it's okay, but I whipped up this A-20c template in just a few minutes and it looks much better. So, if you want a 'c' or a 'g' let us know.

This pic is a WIP. I need to adjust a lot of detail levels, move some rivets around and I'm still thinkin' about some sort of greenish tail thingie.